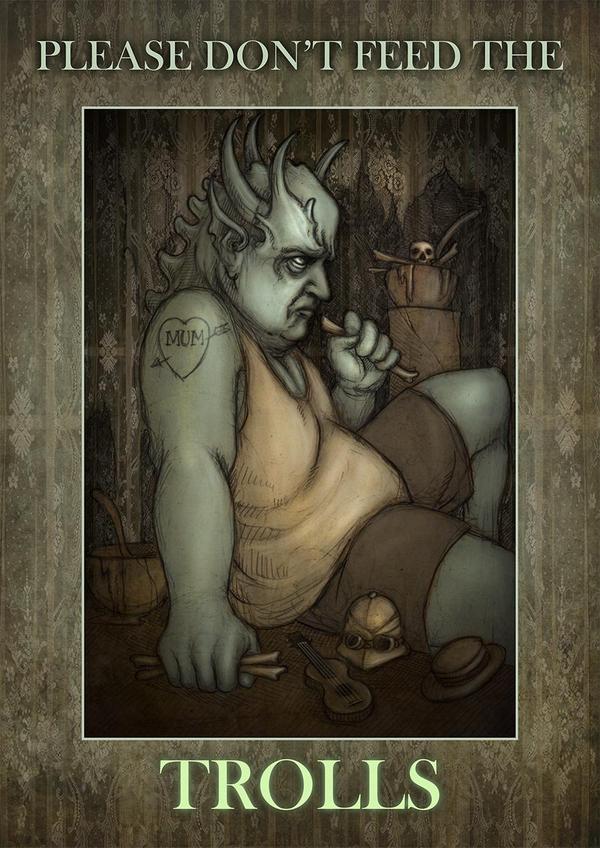 My good friend Professor Elemental is crowdfunding to produce a music video with an anti-bullying making the world a better place sort of message. Truth be told ‘crowdfunded’ is more accurate – the money needed is raised, but there’s some days to go, and all the extra cash that the project delivers is going to three awesome charities helping young people. If you want to be part of the splendidness, hop over to https://www.indiegogo.com/projects/don-t-feed-the-trolls-the-music-video

The startling chap on the left (for those of you who can see him) was created by my other half, Tom Brown, and is a poster exclusively available via Don’t Feed the Trolls. He may remind you of someone. Of course all resemblance to any Prime Minister, living or dead is wholly coincidental, but there’s a political point to make here. This is how we see internet bullying – it’s poor, overweight, ugly and probably still living with its mum. We’re used to looking for bullying when it shows up like this, and we find it harder to spot when it’s got a suit and a PR department. Put this troll in a suit and you’d be more likely to accept what he says as reasonable. Even as he eats you.

Take the troll out of the suit, and he looks like something else entirely. We’re surprisingly susceptible to the messages encoded in costumes. Power and money do not equate to the right to bully others. However, when bullying tactics are an integral part of the political scene, and are offered on TV under the guise of ‘entertainment’ it’s little wonder so many people get online and do all the same things, and feel entitled to name call, abuse, denigrate and threaten.

Not feeding the trolls is not just about avoiding the sad souls online who spit poison. It’s about taking a long, hard look at the culture we’re helping co-create, and the far nastier and more subtle trolls we’ve allowed to grab positions of power.

Druid, author, dreamer, folk enthusiast, parent, polyamourous animist, ant-fash, anti-capitalist, bisexual steampunk. Drinker of coffee, maker of puddings. Exploring life as a Pagan, seeking good and meaningful ways to be, struggling with mental health issues and worried about many things. END_OF_DOCUMENT_TOKEN_TO_BE_REPLACED
This entry was posted on Wednesday, November 5th, 2014 at 11:29 am and tagged with politics, Professor Elemental, trolls and posted in The quiet revolution. You can follow any responses to this entry through the RSS 2.0 feed.
« Not so mindfulness
Qualities of weariness »