River Magic by M.A. Phillips is witch lit, romance, and magical realism and I heartily recommend it. This is a contemporary set novel with a main character exploring the Druid path in America. It’s a really lovely book with a great deal to recommend it.

While this is a straight romance, there are a number of queer characters in the story, which made me really happy. It turns out that I enjoy het romance a lot more when it isn’t set in a hetronormative context. Much of the book deals with the developing relationship, not just the opening gambits of  getting into a relationship – I really like this I think we need a lot more stories about people who are together rather than just obsessing over people getting together.

The Druid content is perfect – because the author is a Druid. It goes deeper than the rituals and beliefs though. This is a story that is absolutely rooted in a landscape and where the seasons are intrinsically part of life. There’s great richness to the writing around the river, the mountains, and trees that not only brings the story vividly to life but really conveys a sense of lived Pagan experience. I loved reading this, and realised how much I need this kind of story that reflects my values and priorities.

The magic is compelling, and Pagans who have had their own woo-woo experiences will recognise the challenges this brings. It’s one thing doing a tarot reading for love guidance and quite another acting on otherworldly instructions. Again, it’s wonderful seeing this sort of content handled by someone who clearly knows what they are talking about. I also really like the way the author tends to avoid big drama, and keeps the characters in a more realistic relationship with reality.

This is a beautiful book, and I loved it and look forward to the rest of the series. It’s very human, and warm and grounded, while also being magical and soulful.

This is part of a blog tour, and you can find out more about that here – https://www.storytellersontour.online/2020/10/20/tour-schedule-river-magic-by-m-a-phillips/ 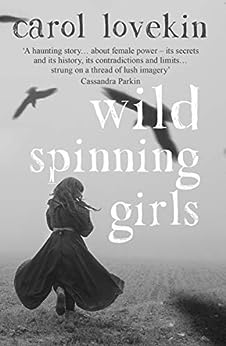 Wild Spinning Girls is the latest novel by Carol Lovekin. It’s contemporary set and I consider it to be witch-lit – there’s magic, ghosts, a witchy character, and a world view Pagan readers will certainly relate to. It’s also a story about grief and loss – the wild spinning girls of the title have both lost their parents and are struggling to make sense of life. Heather is 17, Ida is 29 and they are unexpectedly thrown into each other’s lives as a consequence of that bereavement.

One of the things that really struck me about this book is that it is dominated by women, and none of those women could be called ‘nice’. There’s one female character whose wisdom, compassion and generosity really shines through. Everyone else is, to some degree, a mess. Hurting, flailing, angry, resentful, making bad choices, and otherwise struggling. Women who say what they think, not what they think the other person wants to hear. Women who are trying to sort their own lives out and who are not, for the greater part, focused on trying to save someone else.

It struck me how unusual this is. To have a big cast of female characters who are allowed to be selfish and self involved and living their own lives and doing their own things. By the end of it, none of them have been pressured into becoming more willing to serve others. Several of them have become better at asking for and receiving help, and you can see how this might soften them in the future.

I love the haunted, gothic qualities of this book, the sense of place and landscape and the magic that permeates it. I found the grief arc hard – that’s really a matter of timing I think. If you’re looking for catharsises and a text that gives you opportunities to have a bit of a cry, this could be helpful right now. If you’re already feeling too raw, put it on your to-read list and come back when you’re more resilient. It’s an excellent book and well worth your time.

You can get it as an ebook, which is no doubt the safest and quickest way to pick up new books at the moment – https://www.amazon.co.uk/Wild-Spinning-Girls-Carol-Lovekin-ebook/dp/B083PZXDQN/

Creating a new genre – a guest blog from Laura Perry

By Nimue Brown
Have you ever wondered where genres of literature come from? I’ve watched the birth of a new genre over the past year or two and I’m very excited to see where this one goes. The new genre? Witch Lit.
A lot of the time, a genre of literature comes into being when someone (or more likely several someones) realize there’s a bunch of writing out there that follows a common style, theme, or set of contents. That’s exactly what happened with Witch Lit.
The term started out in casual use, as a sort of witchy-magical version of Chick Lit – fiction with strong female characters and a heavy dose of magic and witchy-ness added in. Sometimes it was magical realism; other times it was fantasy or updated fairy tales. But the magical element and female characters held strong, regardless. I was gratified to realize that my novel The Bed fits nicely into this genre, since I felt a bit off-kilter trying to stuff it into categories like urban fantasy or occult fiction.
As the conversation continued, the term Witch Lit acted like a magnet. What is Witch Lit, exactly? Does it have to be fiction? What about non-fiction that helps us appreciate and encourage the magic in our lives? What about poetry and songs that celebrate that magic and witchy-ness?
Yes to all the above.
It turns out, Witch Lit answers a need/desire a lot of people have to bring some magic into their lives via the stuff they read. Especially when that stuff involves strong, relatable female characters and maybe a touch of humor.
Unfortunately, Witch Lit isn’t an official category you can search for on Amazon or anywhere else that sells books. Not yet, anyway. Those of us who write Witch Lit began to wonder how, exactly, people were supposed to find works in this genre once they heard about it.
So we started a Facebook group for readers and writers of Witch Lit and began tossing ideas around. After a bit of conversation, we settled on the production of an anthology. It would include fiction, non-fiction, and poetry from writers whose styles varied but whose works counted as Witch Lit. It would be in e-book format only to keep the price low, and all proceeds would benefit charity. That way, people could get a taste of the genre and authors could get some exposure to readers who want a little more magic in their TBR pile.
I’m amazed at how fast this genre has built up and how quickly the anthology has come together. With 23 contributors and a total of 26 short stories, essays, and poems, the anthology is quite a substantial read for quite a low price (99p on UK sites, where we started out, which converts to about $1.26 in US currency). All proceeds go to the excellent charity organization Books for Africa. The official release date is 21 June (Summer Solstice here in the northern hemisphere) but it’s available for pre-order now, pretty much anywhere you can buy e-books online. It’s titled Witch Lit: Words from the Cauldron and it is very much a community project.
I hope our daring march into the world of publishing helps get the word out about Witch Lit. It may not be a label on bookstore shelves yet, but it’s a genre full of great reads and plenty of magic. I think the world could use a little more of that these days.
LINKS
Facebook group for readers and writers of Witch Lit: https://www.facebook.com/groups/1055104057875422/
Witch Lit on Twitter: https://twitter.com/WitchLit1
The Anthology:
Amazon US: https://www.amazon.com/Witch-Lit-Witches-Who-Write-ebook/dp/B07SCVXR88/
Amazon UK: https://www.amazon.co.uk/dp/B07SCVXR88/
Smashwords: https://www.smashwords.com/books/view/942180
It should also be available in the Apple iStore and on Barnes & Noble, Kobo, and other online sites that sell e-books. Just search “Witch Lit Words from the Cauldron.”

Witch Lit and why we need it

I read Bridget Jones’s Diary back when it came out, curious about the hype. I hated it. Over the years as a reviewer I’ve been hit by the odd low-flying chick-lit title, and as a reader I’ve read a lot of book covers. Aside from romance, this is the genre targeted most at women. It tends to include romance anyway. Unfortunately the women in Chick Lit novels (based on the blurbs, and Ms Jones) are alien creatures I can make no sense of.

Not so long back, I had the good fortune to read Sheena Cundy’s The Magic and the Madness. It revolves around a small, witchy family. Modern Pagan witches that any modern Pagan woman could recognise. If you aren’t one of the characters, the odds are you’ve met her at a moot. Real life issues, magical issues, matters of life and death – and yes, a bit of romance. Lots of comedy, and lots of values and ways of seeing the world and being in it that I recognised and responded to. I enjoyed it a lot, and found it affirming.

I’ve never been a chick. Never aspired to be one. Why would I read books that I assume I’m someone I am not? I have an on-off relationship with Women’s Literature as well – all too often these are books in which very little happens and everyone thinks about it a lot (that’s a working definition of literature). I want books where a fair bit of interesting and surprising stuff does happen, and people do reflect on it and it has real consequences for them. I want books where women are main characters, and where their lives do not revolve entirely around their love affairs with men. I want to read about women who are complex people with an array of things going on.

Sheena generously waved her book at me because she’d read Intelligent Designing for Amateurs, and based on what I’d written, thought I’d like her book. She was absolutely right. Stories about women doing things, more and less realistic, are very much my cup of tea. Throw in some magic, some comedy, a broad emotional pallet, and I’m in. And yes, the blurb focuses on the sexy vicar, but I’m glad to say the world of this novel doesn’t revolve around him. It’s heart is the relationships between the central women.

What I need, is Witch Lit. Stories about earthy, passionate, grounded women living real lives and doing outrageous, wild and wonderful things. Women whose lives do not revolve wholly around the presence or absence of men. Women whose conversations with other women do not revolve exclusively around the discussion of their sex lives, and the presence or absence of men. I’m starting to realise why, for most of my adult life, I’ve been so drawn to Lesbian Fiction – it’s one of the few genres where you can be reasonably confident of finding women who are not all about the men. However, not being a lesbian myself, I’d really welcome more stories of bi and straight women doing things as well. I like men, and I’m not averse to romance in a story, but I don’t enjoy samey books, and I don’t like the priorities of many of the female characters in rather too many books.