Together we can escape into other worlds

Role play games are seeing a real renaissance at the moment, which I think is really interesting. Computer games are amazingly complex, high tech and visually stunning (not that I play) but they don’t answer every gaming need. You can’t get that far off script. With a role play game, imagination rules and a determined party can take a game anywhere they want to go. I think it’s interesting that more people are choosing a way of playing that prioritises their own imagination, not the shiny graphics.

I played a lot of roleplay games as a kid, and I’m old enough that there was an expectation you’d grow out of it. Adults do not get to play many games – sure the odd board game with granny at Christmas, and we’re allowed to get excited about sports, but computer games and roleplay games like other forms of childish make believe, we’re not things we were not supposed to keep. Only we did, and it#’s become ever more normal to keep playing. I firmly believe that adults need imaginative play just as much as children do, and for much the same reasons.

Playing allows you to safely test and explore all kinds of ideas. For teenage me, it was a safe way of exploring my own identity. I experimented with ways of being and doing and thinking to see what felt comfortable. No real people were killed, seduced, robbed, rescued, or taken on unreasonably long walks through the woods while I did this. I played two different druid characters along the way, and it helped me decide that the resonance I found in that word mattered to me in some way. We all grow and change, many of us benefit from the chance to try on other identities now and then.

There is a magic that happens when people share their creativity. For much of my adult life, that’s had a workish angle as I’ve co-created books with people. My experience is that co-creating also creates a depth and breadth of relationship that you can’t get other ways. A role play game is a process of co-creation and it does interesting things to relationships. It also means that all my best stories from my teenage years are about the things we collectively imagined.

Hopeless, Maine has always been a collaborative project – Tom worked with several other authors before me, and we’ve tended to draw other people in. We’ve had an online project for some time – www.hopelessvendetta.wordpress.com – where people come and play with us. However, we can only include people at the rate of one or two a week. That’s all about to change.

For some time now, a very nice chap called Keith Healing has been working to develop a Hopeless Maine RPG. The mechanics are unique because the island setting with all its strangeness really demanded that. It’s already the best magic system I’ve ever seen and he’s not finished yet. It means that anyone who wants to come to the island and play with it, can.

I’m really excited about this. I know people who are planning to play this weekend. I know that something I helped create is about to take up residence in other heads and that there will be room in those other heads for creative responses. At some point I’ll jump in to write a scenario as well.

You can find the game here – https://www.etsy.com/uk/shop/HopelessGames 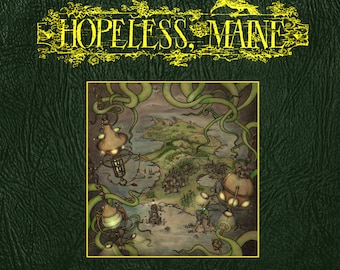