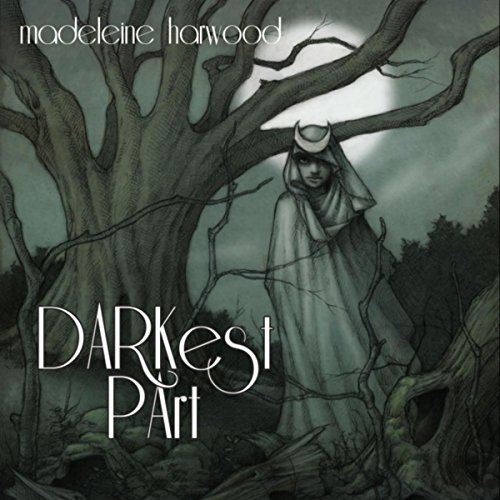 Darkest Part is a ten track album by Madeleine Harwood. Madeleine won Bard of Hawkwood last year, and has gone on to do all sorts of exciting things since – this album being one of those.

Darkest Part is a really unusual piece of work. The songs are all original, and are sung unaccompanied. There aren’t many people who could pull off an entire album of unaccompanied singing, but Madeleine makes this absolute focus on voice and words work for her.

I’m not confident saying what kind of genre of music this is. There’s a folk influence, there’s also blues, jazz, gospel, and moments that put me in mind of many different female singer songwriters who don’t play by the rules. This is something unique, which has grown out of roots music. It is music as art, but it isn’t like contemporary art music. It is voice as instrument, but the words aren’t secondary. The tunes are powerful, soaring, making use of Madeleine’s vast range and vocal power. They are also earworms, I find they follow me around and snatches of song replay in my head at unexpected moments.

In terms of the lyrics, again this is really unusual stuff. The Darkest Part that the title refers to, is being bi-polar. A number of the songs are very much about living with mental health problems. It is intense, beautiful stuff, and there’s much in what’s said here about depression and anxiety that really resonates with me. There’s also a gorgeous overtly Pagan song about Bablon, which gives me goose bumps every time I hear it. The lyrics are in the CD case so you can read them separately – and they certainly reward the person who does that.

I’ve known Madeleine a long time. We were at school together. I was reading her poetry when we were in early adulthood, and I loved her work then, and I love it now. I’ve been fortunate enough to sit with her in pub back rooms and heard some of these songs when they were first written. The amazing voice that emerges from the CD is simply how she sounds any time she sings. You can hear when you listen that this is a voice presented naturally, because nothing needs tinkering with. If you get a chance to hear her singing live, I heartily recommend that you do.

You can find Darkest Part lots of places, here’s the Amazon link – https://www.amazon.co.uk/gp/product/B074Y9CKJ8/