The images in this blog post are inspired by pre-historic art. The hands come from cave pictures where pigment has been blown around hands to leave the shape of them. The surrounds are taken from rock art styles. In the normal scheme of things these two arts would never meet, but I’m not doing this for reconstruction.

I started this quartet because Dr Abbey Masahiro asked me to draw the four of us. I’m not good at literal representation, so the idea of drawing around household hands appealed to me and let me play with the pre-historic imagery as well. Tom had to draw Dr Abbey’s hand from photos so that one came out differently, it doesn’t have quite the same shape as a hand pressed down onto paper and drawn around.

Dr Abbey has been bringing magic into my life for some months now. I’ve been cautious about what to say online. But, he’s very much co-dreaming the future with myself, Tom and James at the moment and it felt like the right time to move from alluding to him, to naming him outright and claiming him.

Also, I did these pieces with my grandmother’s paper and oil pastels. Today is the 100th anniversary of her birth. It seemed like a good day to post this.

This is my hand – the left as I mostly draw right handed. The background is inspired by Irish rock art that I saw referred to online as being flying saucers.

Tom’s hand came out a little chunkier than it is in real life. The background for his was inspired by Newgrange rock art and is my favourite of the backgrounds. 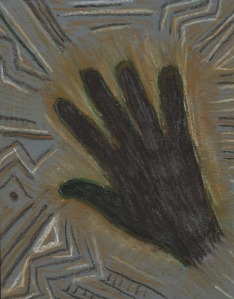 James’s hand. My very large Tigerboy, often alluded to here over the years, now all grown up. He has the same thumb shape as me. I gave him geometric rock art because he’s the one with the maths and science skills.

Abbey’s hand with a background taken from cup and bowl rock art. We had to guess relative hand sizes – his hand is about the same size as mine here. There’s none of the shape distortion that comes from pressing down. It was a strange and emotional process for me, working with the shape of a hand I have not touched, but will.