It’s Only a Clockwork Moon – review

This is a story that unfolds in a distinctly steampunk future where coal is rare and everyone uses clockwork. Clockmaker Nielsen is a bit of a genius for devices, but incredibly naive when it comes to dealing with people and politics. And so he is soon lured into another crazy scheme cooked up by the king, and adventure and mayhem ensue. It’s a very entertaining story.

What particularly interested me about this instalment, is that while Nielsen is at the heart of the story, he’s mostly just reacting to other people. As the plot unfolds, it becomes clear that it’s the women in his life, and women in the wider world who are really moving the action along. We see more of the politics of the wider world here, and it puts our more familiar characters into an interesting new perspective.

Before I started reading this series, I would have told you that I wasn’t the sort of person to get excited about devices in books. It’s an aspect of steampunk that usually does nothing for me. And yet, as the opening pages dealt with entirely human concerns, I realised I wasn’t as in to the story as I had been in the first book. And then, as the device building got underway, I rejoiced! This came as quite a surprise. I love how Billy O’Shea writes the process of creating machines. I’m truly impressed that he’s managed to make me care about this.

More about the book here – https://www.amazon.com/Only-Clockwork-Moon-Kingdom-Book-ebook/dp/B016SC5L6Q 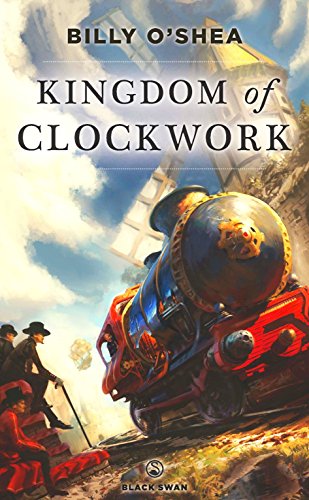 Kingdom of Clockwork is, you realise after just a few pages, not set in the past as it first appears, but set in the future, after the fossil fuels run out. It’s a steampunk novel in a speculative era when coal powered steam is not an option. The story is driven by political machinations, as clockmaker Nielsen finds himself lured into the plots and schemes of his king. The king in question may in fact be mad.

The story itself rattles along to good effect, taking the reader in directions I think most people won’t anticipate. The surprises are delights rather than feeling like rabbits out of hats. Each new twist and turn builds a greater sense of how this future world works. The main character and first person narrator, Nielsen, is an innocent out of his depth, and thus able to take the reader with him easily. He’s also a clockwork geek. Now, I’m not a technically minded person and if asked, would have said that the fine details of clockwork would not intrigue me. However, the clockwork in the story I found totally engaging and it really drew me in. It’s very well written.

Charming though the plot and characters are, what made this book a standout for me is the way the author uses the future to speak to the present.

In this imagined future, much information has been lost about the Age of Electricity. The way in which the history is talked about, re-imagined, feared, mythologized and misinterpreted is wonderful. There’s lots to think about here in terms of how we imagine the past – a very Steampunk concern as well.

Billy O’Shea is able to look at our present from a perspective that is truly alien to it – a real feat of the imagination. It enables him to write about how things are now in a way that casts it all in a very different light. His future people do not share our ideas, values and beliefs, but they are influenced by them, and living in a civilization that follows ours. I can’t say too much or there will be spoilers, but I thought this aspect of the book was total genius.

This is a story you can read for the plots, devices and epic adventures – it has much to offer on that score. If you’re the kind of reader who loves layers and extra things to ponder, this is a good book to get your teeth into. I shall be reading the rest of the series if I can – this one stands alone, but it opens up plenty of possibilities for future tales.

Here’s the book on Amazon – https://www.amazon.co.uk/gp/product/B00LXGSP8Y/ref=series_dp_rw_ca_1