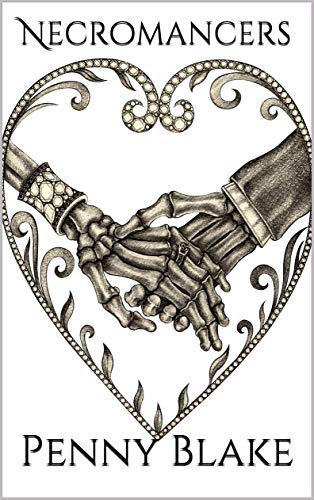 Putting the romance back into necromancy… Necromancers by Penny Blake is a funny, twisted sort of a tale. There are pointy things to be said about religion and the use of humour and fantasy to make comment on human behaviour reminded me very much of Terry Pratchett. I didn’t feel I could review this one, having proof-read it just long enough ago to be unhelpful. I very much enjoyed it.

I can tell you that my slightly evil teenage son chortled all the way through and pronounced it to be excellent.

An Extract From NECROMANCERS By Penny Blake

A terrible accident involving a minor miscalculation has flooded almost the entire planet with lemonade. A few sparse scraps of humanity cling to flotillas of cobbled junk in attempts to sustain some semblance of civilised existence. War, famine and caffeine withdrawal have turned the erstwhile peaceful world into a post-apocalyptic nightmare.

Meanwhile, on the remote and inexplicably unaffected island of Eilean Claigeann, an ancient cult are still obliviously serving the obsolete ‘supreme ruler of the universe’, Wiz, and trying to fathom the secret of immortality. Sort of. Actually daily temple life revolves more around cake sales, bridge nights and village fetes… until two novices discover the secret of immortality themselves and unleash a couple of very unlikely ‘gods’ upon the previously peaceful community.

Thunder, lightening, rain, hail, ominous fog and all the other things that accompany the beginning of an iconic horror movie or damn fine tale about Tea, Cake and lashings of Untimely Death, were occurring all over the little island known colloquially (and everywhere else) as The Skull.

Douglas skidded and stumbled over the vindictively slick cobblestones, cursing the length of his disgustingly sodden red robes, the ineffectual protection offered by his floppy wet cowl, the stupid little purse that dangled at his waist and was constantly expelling all his valuables into the muck, the fact that his favourite pocket watch had broken – again – and any and everything else that passed through his mind as he finally staggered, panting and wheezing, to the top of the hill.

Sheet lightening flared for a second, silhouetting the crumbling chapel as Douglas clasped the cold iron ring in the studded wooden door and, with a cautious shoulder, silently eased it open.

The eerie luminescence of a hundred flickering candles vanished in an ebbing wave, to be replaced by darkness and smoke and a smattering of accusatory choking noises.

“Sorry,” Douglas ventured, shuffling sideways along what he hoped was the back row of folding chairs. There was an almighty crash as something large and metallic clattered to the flagstone floor. “Sorry! So sorry, Francis, er, Your Grace…”

Druid, author, dreamer, folk enthusiast, parent, wife to the most amazing artist -Tom Brown. Drinker of coffee, maker of puddings. Exploring life as a Pagan, seeking good and meaningful ways to be, struggling with mental health issues and worried about many things. END_OF_DOCUMENT_TOKEN_TO_BE_REPLACED
This entry was posted on Saturday, March 7th, 2020 at 10:30 am and tagged with necromancers, Penny Blake, romance and posted in Guest Blogger. You can follow any responses to this entry through the RSS 2.0 feed.
« Seeking wildness
Stroud Poets: Rick Vick – a review »