The Crows – a review 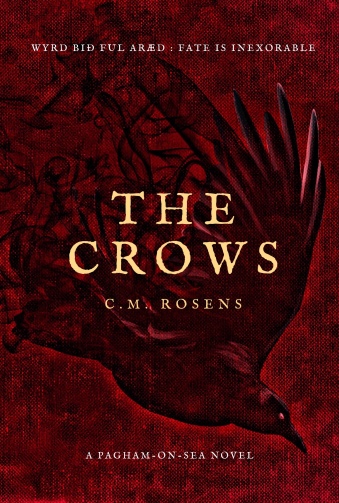 Last year, author C.M Rosens approached Tom for internal illustrations for The Crows. Tom is the sort of illustrator who reads the book. And so he read the book, and he kept telling me as he went along that I absolutely had to read it. He was right, of course, and I’ve just had the experience of reading a novel that could have been written for me. This doesn’t happen to me very often.

Carrie is a domestic abuse survivor, recently escaped. She’s bought a gothic ruin and blown all of her money on doing it up. She is in love with the house. It may be mutual. The house is an hour’s walk from Pagham-on-Sea which initially appears to be all of the nightmares of small minded little England combined. Only it turns out to be much worse than that, and much more interesting.

Here’s a little summary from the author herself, which I have stolen from Twitter:

-Gothic tropes oozing from every page

I loved it utterly.

There was a time when I dabbled in writing romance and erotica fiction. The trouble is, that I can’t write girl meets boy, mild setbacks are experienced, everyone lives happily ever after stories. I tried. Girl meets boy. Girl has a severed head in a bag. Girl meets monster. Girl turns out to be even more scary than the aforementioned monster. Monster turns out to be strangely fragile and vulnerable in some way.

Finding someone doing such an awesome job of writing the kind of stories I was trying to write makes me enormously happy. Finding that it’s not just me who craves the twisting together of love and horror, comedy and gore. Hitting those perfect turns of phrase that are both funny and ghastly all at once, and feeling like I’ve come home. This book made me so very happy.

Find out more about C.M Rosens over here – https://cmrosens.com/

Druid, author, dreamer, folk enthusiast, parent, polyamourous animist, ant-fash, anti-capitalist, bisexual steampunk. Drinker of coffee, maker of puddings. Exploring life as a Pagan, seeking good and meaningful ways to be, struggling with mental health issues and worried about many things. END_OF_DOCUMENT_TOKEN_TO_BE_REPLACED
This entry was posted on Sunday, February 16th, 2020 at 10:31 am and tagged with C M Rosens, fiction, gothic and posted in Reviews. You can follow any responses to this entry through the RSS 2.0 feed.
« Stand By Tree: Protest Songs To Save The Trees
Messing with Sonnets »

One response to “The Crows – a review”