The Curious Adventures Of Smith And Skarry – a review 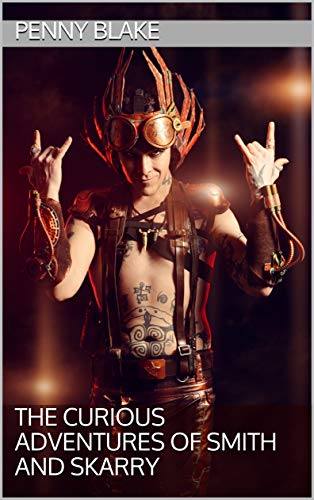 Imagine a world in which caffeine and sugar are controlled for being too dangerous. Imagine illicit tiffin dens, land pirates, soup seers, dodgy magicians, and a very quiet gentleman with an octopus friend… and you’re starting to get a feel for the delightfully madcap reality in which Penny Blake’s Curious Adventures are set.

It’s great fun.  This is playful steampunk adventure with lots of LGBTQ characters (so much yay!), and political substance underneath the entertaining surface. It’s a tale that has questions to ask about who holds power and on what terms. It has things to say about gender and identity, and questions to ask of the reader, who will be left to ponder their own answers at their leisure. For me, this book is the perfect balance of entertaining escapist fantasy, and serious stuff to chew on.

The world building is great – it’s such an entertaining setting, and the way in which tea, and sugar and cake function in the lives of the characters is a joy to behold. For me it also says a lot about who gets to decide which of our pleasures are socially acceptable, and which are vices to be punished or made inaccessible. Actual history is full of this and I think it’s no coincidence that the kind of real-life people who would bring back hunting are often also the ones who would criminalise being gay, for example.

The ways in which money and perceived class impact on how legal and acceptable your vices might seem is certainly a concept you’ll find in this book. It’s there in the dynamic between the two eponymous characters – one of whom has the confidence of wealth and one of whom does not and is consequently a lot more anxious about things. Illicit things become playthings for the affluent who can buy their way out of trouble, and dangerous life choices for people too poor to have many options.

Pagan readers should note that there’s some really interesting Goddess stuff going on in the background of the story. There’s also some no-punches-pulled things to be said about invasive, patriarchal upstarts who wish to be worshipped as Gods.

I very much recommend that you check this book out. My only warning is that it is clearly the start of the series and you’ll get to the end of book 1 and have feelings about not having the next one right now.

And I gather there will be a paperback in the fullness of time!

Druid, author, dreamer, folk enthusiast, parent, polyamourous animist, ant-fash, anti-capitalist, bisexual steampunk. Drinker of coffee, maker of puddings. Exploring life as a Pagan, seeking good and meaningful ways to be, struggling with mental health issues and worried about many things. END_OF_DOCUMENT_TOKEN_TO_BE_REPLACED
This entry was posted on Sunday, September 29th, 2019 at 9:30 am and tagged with fiction, Penny Blake, steampunk and posted in Reviews. You can follow any responses to this entry through the RSS 2.0 feed.
« Upcycled Steampunk against waste
New adventures in Druidry »