The Pre-Programming – a review 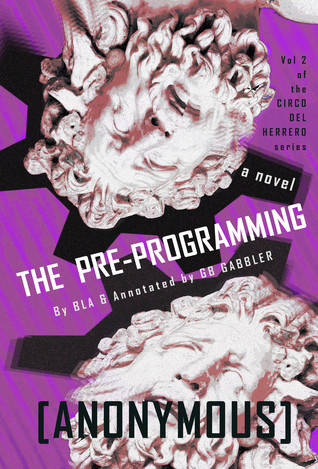 I read and reviewed The Automation – part one of the Circo del Herrero series back in the summer. Volume 2 is now out and honestly it blows the first novel out of the water. I really enjoyed the first book, but volume 2 achieves whole new levels. It’s also nigh on impossible to talk about the plot without spoilers for the first book.

This is a modern set fantasy in which Vulcan (the God) has automata running around in the human world causing trouble and adventure. You do not need to know your Greek or Roman Gods to get in here and enjoy the tale. You can’t start with volume 2 though. You really have to begin and the beginning with this series or you will be utterly lost. This is a complicated reality with a lot of ideas in it, and you need to get in and appreciate some of those ideas before you have them taken apart for you.

Volume 2 picks up the plot threads from volume one, laughs at you, and runs off in a whole selection of new directions. Nothing makes me happier as a reader than a well crafted story that I cannot predict. This is one of those. Twisty doesn’t begin to describe it. I was entirely surprised, repeatedly. Plot shapes suggested by volume 1 crumbled. Characters died. Agendas were revealed to be other than expected. No one was quite who I thought they were. By the end of book 2 it looks like the real plot has emerged, and now we know what’s going on. I expect we’re being set up for even more massive rug pulls when volume 3 comes out.

There was one line in the FAQs at the start that stuck out for me “Because the author of this series grew up in the Bible Belt, is of indigenous descent and has a lot to say (sub-textually) in response to colonialism and literature like American Gods, for instance.” It struck me that this series (at the moment) is well worth considering as a response to American Gods and that looking back at American Gods with this in mind, I now feel quite uneasy. And also happy to feel uneasy in retrospect.

I heartily recommend this series, it is knowing, funny, provocative, full of surprises. I wait impatiently for the next instalment. Find out more at circodelherreroseries.com

Druid, author, dreamer, folk enthusiast, parent, polyamourous animist, ant-fash, anti-capitalist, bisexual steampunk. Drinker of coffee, maker of puddings. Exploring life as a Pagan, seeking good and meaningful ways to be, struggling with mental health issues and worried about many things. END_OF_DOCUMENT_TOKEN_TO_BE_REPLACED
This entry was posted on Sunday, January 6th, 2019 at 10:30 am and tagged with book, fantasy, gods, novel, review and posted in Reviews. You can follow any responses to this entry through the RSS 2.0 feed.
« Light, mist and intuition
Pronouns for nature »

One response to “The Pre-Programming – a review”