Daughter of Light and Shadow – a review 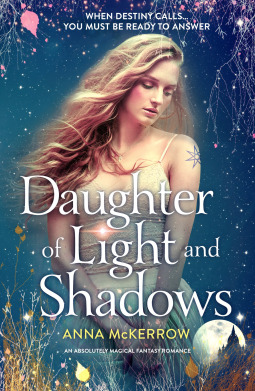 At the surface, this is an erotic romance novel with magic in it. There is a lot of very sexy fairy content, and great fun it is, too. But that’s not really what the book is about. This is a novel about a young woman coming into her own power, dealing with why she is, what she is, where she comes from and, seeing all of that, starting to make deliberate choices about her life. The sex might be wild, but it certainly can’t save her. The love is there in her life, but it isn’t the magic answer to everything. And as for the magic – until she deals with her own shadow self it is as likely to trip her up as it is to help her.

There’s a nice balance here between escapist, folklore-based fantasy, and concepts a person can get their teeth into. If you like your fantasy well rooted, this is the business. The fairy side is steeped in folklore and tradition, giving us fairies who are cold, other, unreasonable, fickle, charming and exceedingly dangerous. These are more like the fairies from Jonathan Strange and Mr Norrell than the pretty things of standard modern urban romance. The magic has a strong elemental component to it, and again there’s folklore in the mix as well as material drawn from modern Paganism. There are the witchy ancestors who so often a feature in witchlit, and there’s the question of ancestral wounding.

I’ve seen this come up a few times in various novels now. Anyone writing a modern witch with a witchy ancestry immediately hits the issue of historical persecutions. This book tackles the issue of ancestral wounding head on, while making clear that many of the people persecuted for witchcraft historically were victims who had nothing to do with witchcraft but were vulnerable in some way. It’s nicely done.

If you’re looking for fairy romance, this probably isn’t the book for you because it doesn’t uphold the habits of the romance genre very well. If like me, you prefer stories that surprise you, this is much more interesting. If you’re looking for stories about love and sex that don’t make them the only considerations in a young woman’s life, then Anna McKerrow is an author I can very much recommend. If you want passionate, full blooded witch lit with magic you can relate to and characters who live in the real world at least some of the time, this is a good book to pick up.

Druid, author, dreamer, folk enthusiast, parent, polyamourous animist, ant-fash, anti-capitalist, bisexual steampunk. Drinker of coffee, maker of puddings. Exploring life as a Pagan, seeking good and meaningful ways to be, struggling with mental health issues and worried about many things. END_OF_DOCUMENT_TOKEN_TO_BE_REPLACED
This entry was posted on Sunday, October 14th, 2018 at 9:30 am and tagged with Anna McKerrow, fairy, magic, romance, witchlit and posted in Reviews. You can follow any responses to this entry through the RSS 2.0 feed.
« Identifying Predators
Wonky realities and unthinkable thoughts »

3 responses to “Daughter of Light and Shadow – a review”