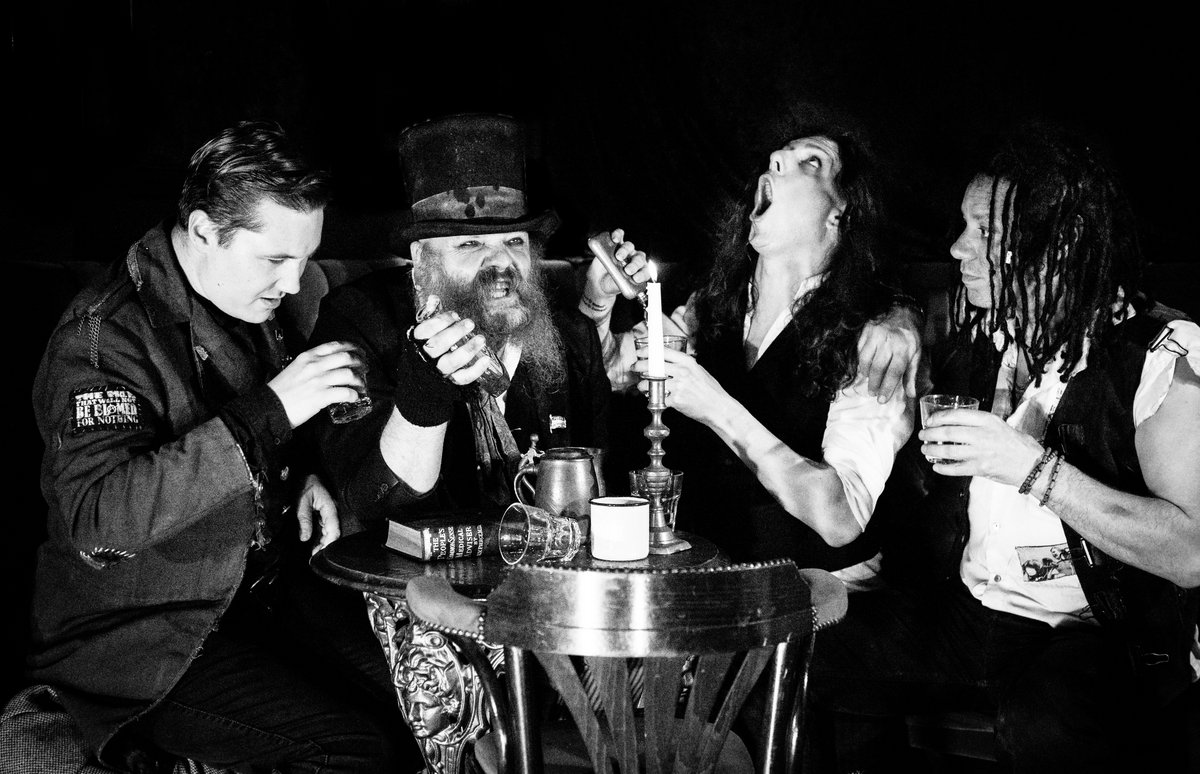 The theme for this year’s Steampunk Hands around the World is ‘Favourite things’ so I’m going to use today’s blog to talk about why I love retro-politics, and The Men That Will Not Be Blamed For Nothing. They are, for those of you who are as yet uninitiated, four chaps with punk influences, guitars, drums, a musical saw, comedy genius and a great willingness to make a lot of noise.

I shuffled into the idea of retro politics quite by accident, while writing Intelligent Designing for Amateurs. It’s a simple enough idea – talking about the politics of the past in order to say something about the present. It’s something The Men are exceedingly good at. In this period of despicable austerity, talking about Victorian England is a really good way of illustrating how backward we’re being, while being funny, and creating enough emotional distance to make it bearable. You wouldn’t go out to listen to a band sing about the terrible air pollution in London, but somehow a song about Victorian smog does exactly the same job while being funny.

One of my favourite songs on this score is Doing it for the Whigs, which pauses at one point for Andrew O’Neill to shout ‘That’s right, votes for women! Fucking get over it.’ I could go off on a long, long rant about the modern men who think women should not be allowed to vote, but I’ll stick with Andrew’s line. It’s charmingly to the point. Their ‘Charlie’ song works in a similar way, reflecting Victorian fury with Darwin suggesting they were all descended from apes, and here we are, all this time later and we’ve still got people pedalling intelligent design. I could get very depressed at our failure to progress, but I won’t, I’ll go and listen to Margate Fhtagn (didn’t we have a lovely time the day we met Cthulhu).

Modern politics are, for the greater part, bloody depressing. Retro politics makes it possible to laugh. And The Men that Will Not Be Blamed For Nothing are a very entertaining outfit, and a fantastic live act. I saw them at Exeter last December. They talked from the stage about the importance of community and getting skills that have a real use. They talked about deliberately keeping their ticket prices and merchandise costs as low as they can ‘so you don‘t have to exploit someone else to be able to afford our shit’. My kind of people, my kind of philosophy. Get angry, and have a laugh and change everything.

“The Men That Will Not Be Blamed For Nothing come from a past which probably never happened via a present they didn’t want.” Read more about them here – https://en.wikipedia.org/wiki/The_Men_That_Will_Not_Be_Blamed_for_Nothing

This is them on bandcamp – https://blamedfornothing.bandcamp.com/

Druid, author, dreamer, folk enthusiast, parent, polyamourous animist, ant-fash, anti-capitalist, bisexual steampunk. Drinker of coffee, maker of puddings. Exploring life as a Pagan, seeking good and meaningful ways to be, struggling with mental health issues and worried about many things. END_OF_DOCUMENT_TOKEN_TO_BE_REPLACED
This entry was posted on Saturday, February 6th, 2016 at 11:30 am and tagged with politics, steampunk, the men that will not be blamed for nothing and posted in Reviews. You can follow any responses to this entry through the RSS 2.0 feed.
« Open Art Surgery
Transport isn’t spiritual? »

One response to “Favourite Things – Retro politics and unblamable men”